Cisco just held its PONC 2022 conference, with over 500 attendees registered. We found the most exciting topics at the three-day show were: (a) its progress with RON, (b) PLE availability, and (c) the 400G ZR ramp. Cisco is pushing for integrating optical transceivers with routers, a significant step forward for the industry.

The company indicated that it is seeing significant momentum for uptake of its Routed Optical Networking (RON) products; it now has 20 customers that have deployed RON networks. Additionally, there are 45 Proofs Of Concepts trials underway and more than 150 customers engaged with Cisco in various stages for RON products. Cisco touts that its RON systems result in a 78% decrease in power, a 76% decrease in rack units, and a 76% decrease in physical weight compared to using the traditional setup of separate routing and OTN systems.

Private Line Emulation (PLE) is now available for customers as a function on several of Cisco’s router product lines. We asked whether PLE can be made available to older routers, and the answer was yes, depending on customer demand to incorporate this feature. Cisco expects that it will have a significant number of PLE customers by this time next year who will take advantage of the PLE function to drive traffic that historically ran over OTN networks. The company shared its view that PLE improves latency when compared to an OTN system because its routers introduce a 5-10 microsecond latency (roughly equivalent to that of a 1 km span of fiber optic cable) compared to an OTN switch, which takes 40 microseconds.

​We also learned that Cisco’s integration of recently acquired Acacia is proceeding smoothly; its 400G ZR modules are shipping. It plans for other modules to become available in the future, including 0 dBm ZR modules (autumn 2022 availability), a QSFP-DD Open Line System (OLS) (First Customer Ship in C1Q23). Google presented on Day 1 of the conference and explained that it sees a 50% CapEx savings by using 400G ZR instead of traditional transponder systems. It shared that it experienced significant OpEx savings related to power, space, and management cost reductions.   And, Google said in the past three years, its bandwidth has growth between four to five times.  Several of Cisco’s customers shared their experiences working with Cisco ZR and related products, including Arelion, CENIC, Colt, WebSprix, Windstream, and Zain. Windstream said that it got ZR+ working to over 1,000 km in its tests and deployments.  Cisco’s team summarized its ZR success by sharing that its 400G Coherent journey from 2011 to current days has led to significant size/power/cost reductions of 40% Y/Y in the past decade. 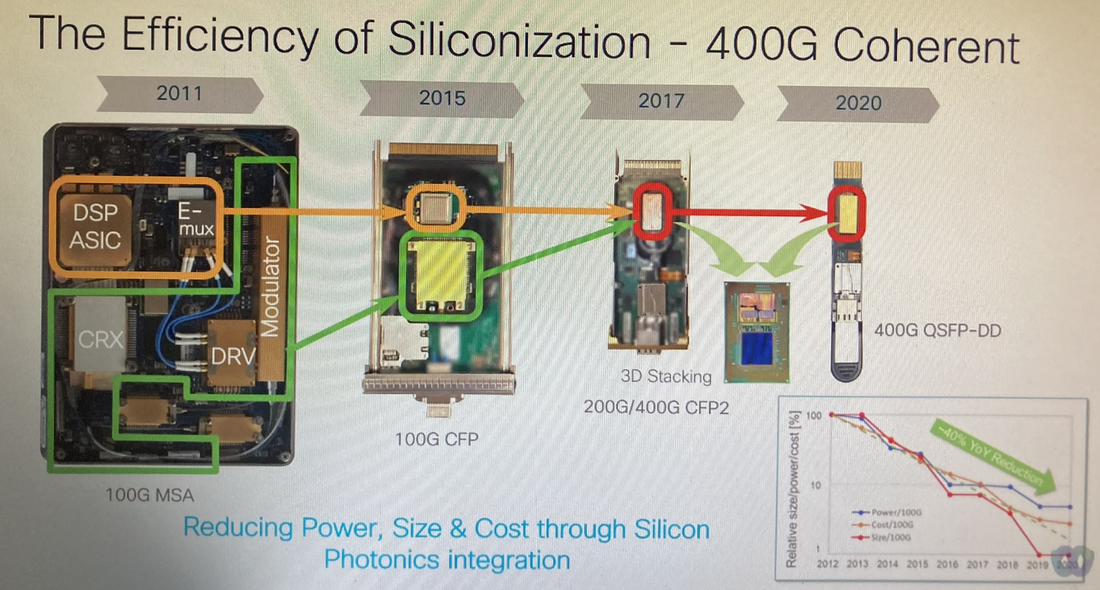