Juniper made a significant announcement at OFC on the photonics front.  It announced the launch of silicon photonics optics designed and built by Juniper. This is a big deal for the industry and for data center networking.

To give some market background, as the market moves from 100 Gbps to 400 Gbps, and then beyond, the cost of the optic is becoming a larger part of the spend. As hyperscalers tend to buy optics separately from the switch and from different vendors, this is lost Total Addressable Market (TAM) for the networking vendors if they don’t adjust product offerings.  Vendors risk losing wallet share and thought leadership due to the transition.

Juniper is building their own photonics optics, and growing its own silicon to create a product that is compelling to cloud providers.  Engineering like this is not only hard, but cool and pushing the upper limits of science. As we look at data center fabrics beyond 2020, this type of technology is needed to get speeds beyond 25.6 Tbps in a single 1RU switch.

We note that by targeting just large Cloud customers, Juniper is actually targeting nearly 90% of the market, so while the announcement may seem limited in customer count, it comprises almost the entire revenue and shipment opportunity for 400 Gbps in the next two years. By engineering the solution in house, Juniper will be able to offer better power and better cost.  Power should not be underestimated as data center locations are struggling to get additional power.

At a higher level, over 25% of the Ethernet Switch market in the data center is actually optics. That percent is growing with time. Juniper’s addressable market has gone up significantly by offering optics which is a good thing for the data center market and its evolution to higher speeds. 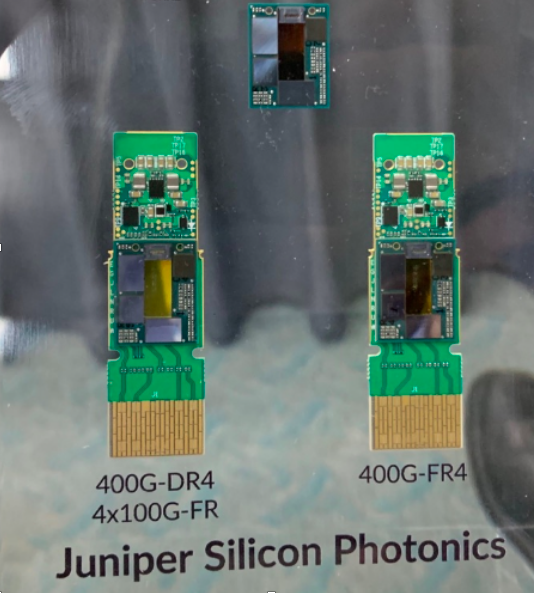