Mellanox and Arista May Announcements

The hyperscale, cloud and hyper converged industry — despite a pause in data center equipment growth in Q1, as we reported last week—  saw two major Ethernet product announcements so far this month.

Both new platforms, announced by Mellanox and Arista respectively, are supercharged to take the data center to the next level. They play into all of the big trends of cloud hosted, mass virtualization and automation of trouble shooting through telemetry.  They also seem to set some new performance records.

Details:
First there is Mellanox, unveiling this week its “Ethernet Cloud Fabric” (aka ECF) new switches underpinned by its  Spectrum2 chipset. Mellanox is emphasizing automated troubleshooting with telemetry, support of virtualization, scale to 400GbE, and a fully shared buffer architecture for improved performance in hyper scale cloud environments.

Next is the announcement from stalwart cloud player Arista, and it has delivered its own new products, its’ R3 Series routing platforms. The emphasis is on massive throughput, density, power efficiency and price performance. 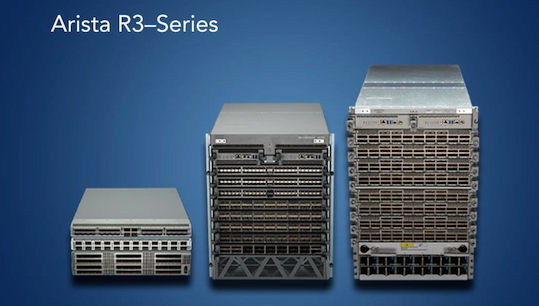