Nokia’s Global Analyst Forum this week highlighted two main trends.  First, the company says it has caught up to rivals in its 5G radio development.  Furthermore, the company expects its wireless systems to become increasingly technologically differentiated from competitors.  Second, the company emphasizes its message that it is the “green partner of choice.”  We read that the company is making more power-efficient communications equipment.  Apart from its significant themes meant for headlines, the company also highlighted that: (a) it’s experiencing strong private wireless growth, (b) its RAN systems are in the pilot phase with hyperscalers like AWS, GCP, and Azure, (c) it is embracing Open RAN faster than other established competitors, (d) it expects the Remote Radio Unit (RRU) to take an increasing fraction of total RAN spending, (e) it sees the RIC as a market expansion, (f) it expects to differentiate in radio in 2022 with its growing Carrier Aggregation capabilities.
​
Nokia, which has significant revenue exposure to Mobile RAN, is in an interesting phase of its corporate development.  With having brought on new CEO, Pekka Lundmark, recently, it abandoned its end-to-end product portfolio strategy.  Yet, in recent times, the company’s non-radio portfolio has outperformed radio access network growth trends, which reinforces the idea that its broad portfolio serves it well.  One of the company’s primary messages from the conference was that its RAN portfolio has caught up to competitors and that next year it will deliver significant improvements, including Carrier Aggregation and a broader portfolio of Massive MIMO systems.  The company also said that it is working with a broad set of infrastructure providers and infrastructure software companies that will be able to support its RAN and core portfolio; examples include Anthos, Kubernetes, VMWare Tanzu, AmazonEKS, OpenShift, among others, operating on AWS, Azure, Google Cloud or on premises-based infrastructure.  Nokia is investing in broadening out the appeal of its RAN and core systems both by embracing these various non-Nokia systems, as well as supporting Open RAN.  The company says it expects an increasing amount of value to accrue to the RRU and away from baseband, which we see as consistent with its support of so many different infrastructure systems that would run baseband.  The company sees revenue upside in the RIC market, part of the Open RAN architecture.  The company’s support of Open RAN will lead to the commercialization of Open RAN systems in about two years, according to Nokia. 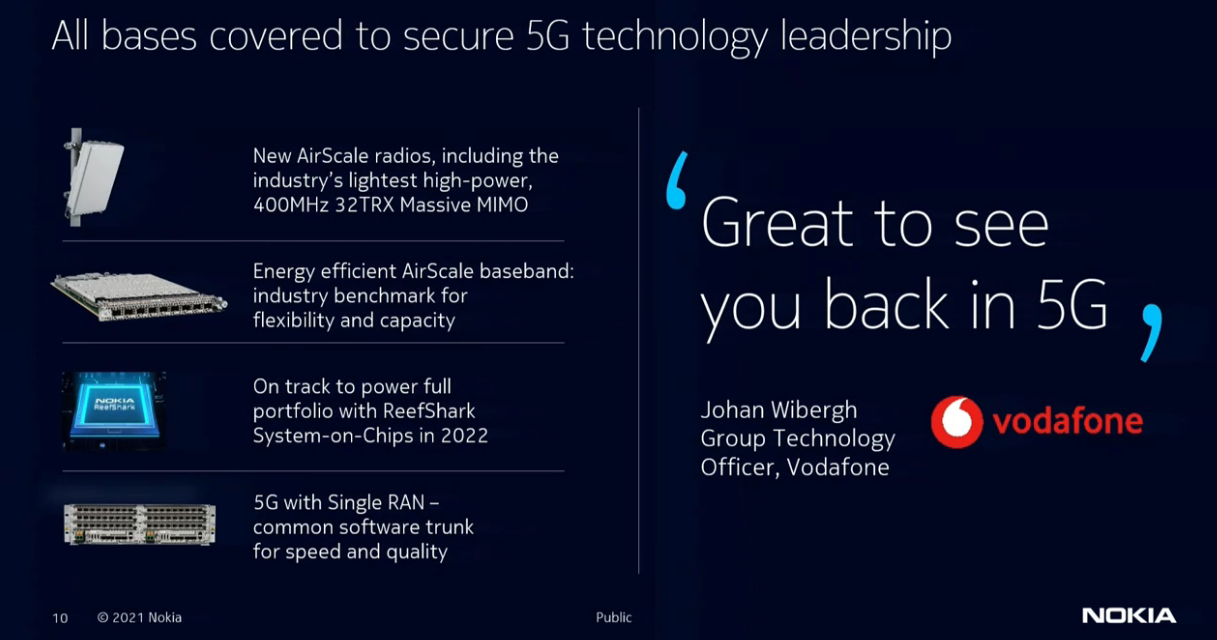 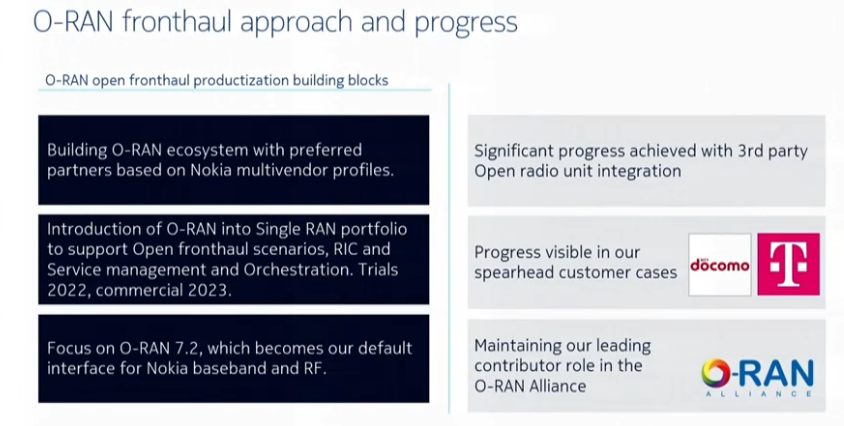 Furthermore, the company’s telecom core business is experiencing an acceleration in business trends.  Like the RAN architecture support for various cloud systems, Nokia is even further along in offering support for its core systems like 5G Core.  Management made two comments during its discussions that did an excellent job of explaining how far along the core market is in moving towards a hyperscaler-based infrastructure.  First, Nokia said that “50% of RFQs include an option to run on top of the Hyperscaler.”  Second, Nokia explained that of 82 of the engagements, 20 have serious public cloud investigations and dialog going.

We are also encouraged by the company’s leadership in Fixed Wireless Access (FWA) and 25G PON.  In 5G FWA, the company has some significant antenna and software algorithm capabilities, and we expect new, cutting-edge products in 2022.  In 3GPP 5G FWA, the company holds a significant revenue market share lead as of 3Q21, illustrating its robust capabilities.  The company made a bet on 25G PON and was a significant contributor to an MSA Group called 25GS-PON.  Additionally, Nokia developed its own semiconductors, called Quillion, to support 25G PON (backwards compatible to lower 10G and 1G speeds). 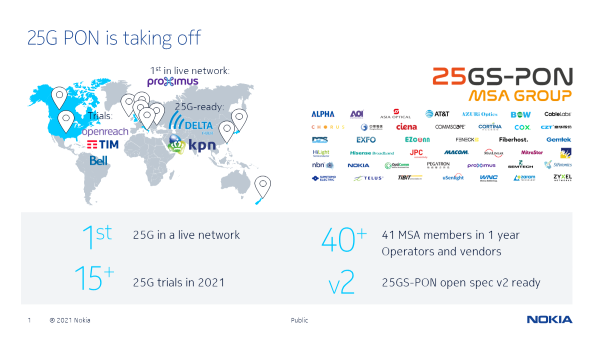