​Today, Rakuten announced that has acquired the rest of Open RAN startup, Altiostar.  It already owned 67% of the pioneering vendor, and paid another $370 million to acquire the rest, at a valuation just over $1 billion.  The company is adding Altiostar to its Rakuten Communications Platform (RCP) capabilities now known as Symphony, that it is selling to mobile network operators.  The company also announced its first commercial customer for RCP Symphony, German startup mobile operator called 1&1.  Now that RCP Symphony has expanded to include RAN, the total system is rather comprehensive (shown below).

The company shared what is included in the Symphony suite, which can be broken into five major pieces: 1) Internet & Ecosystem Services, 2) Digital Experience, 3) Intelligent Operations, 4) Network Functions, and 5) Unified Cloud.  Compared to traditional telecom equipment companies like Ericsson, Nokia and Huawei, who have significant parts of their revenue exposure in the last 4 of the major pieces that Rakuten offers in Symphony.  What’s different is Rakuten will be offering Membership & Loyalty Platforms, Media & Gaming Platforms, Payment & Finance Platforms, and Marketplace.  Additionally, Rakuten can offer Cloud Infrastructure, similar to what Amazon Web Services, Microsoft Azure and Google Compute offer.  We think Rakuten is taking on a lot by offering Symphony, but it has proven that many, if not all, parts already work – that’s because it has 4 million Japanese subscribers on its Rakuten Mobile Network already.  That is a big endorsement.

The 1&1 deal includes the entire RCP full stack and is structured as a “Design-Build-Operate” contract.  The plan is to start work “next quarter,” and all engineering is done in-house by Rakuten and the team will manage installation done by others.  By 1Q22, Rakuten will be deploying commercially for 8 years, and its operation plans last 10 years.  The mix between base stations, servers and network software is 70% radio access network and 30% on the rest.  Hardware and software mix is 65% hardware, rest software and services.  RCP provides an “open-book” approach on purchasing of hardware to its customer. 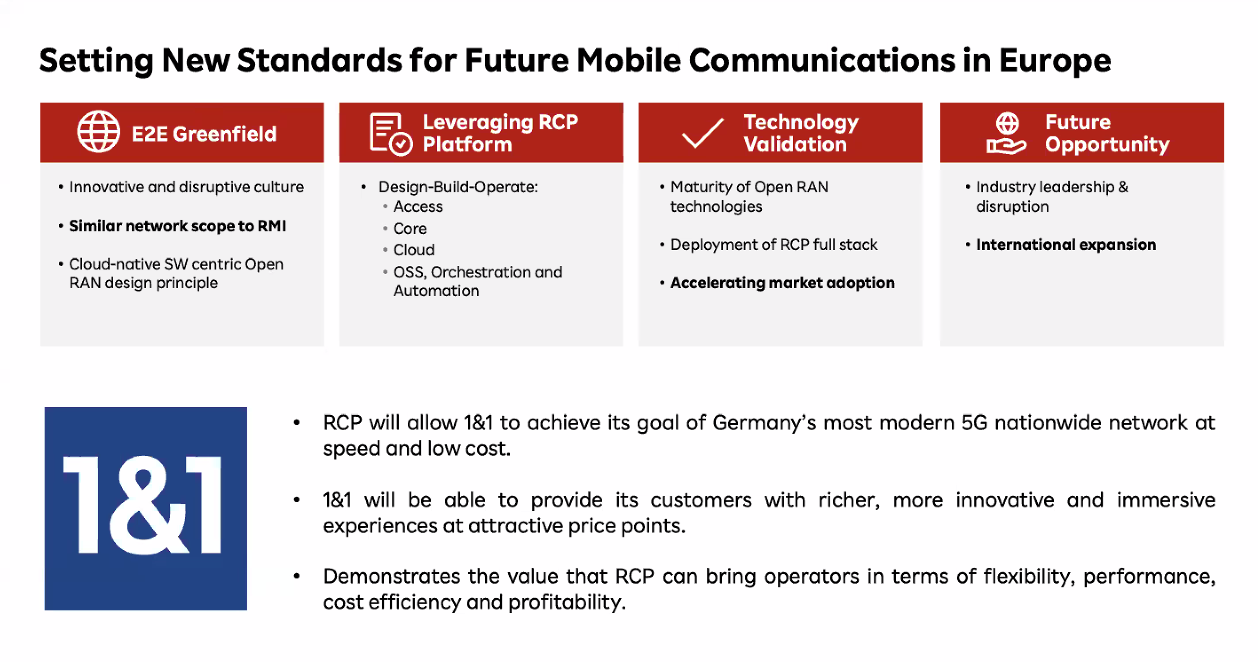