Western Digital Corporation, also known as WDC, held its investor meeting yesterday.  We highlight four important disclosures: (a) it expects HDD to survive, despite flash’s advantages, (b) WDC’s plans to use RISC and launch a new memory interface, (c) an update on current business trends, and (d) the company’s plans for its storage systems business.

First, since the company owns both Hard Disk Drive (HDD) and Flash divisions, it has an interest in keeping investors informed of the relative competitiveness between the two.  Two and a half years ago, WDC closed on its acquisition of flash pioneer Sandisk.  Around that time, the company was asserting that there is, and the company anticipates it will remain the case, that HDDs will retain at least a 10-times advantage versus flash on a cost per bit ($/GB) stored basis.  At the company’s meeting yesterday the company reiterated its view that this 10x advantage will continue at least till the year 2022. 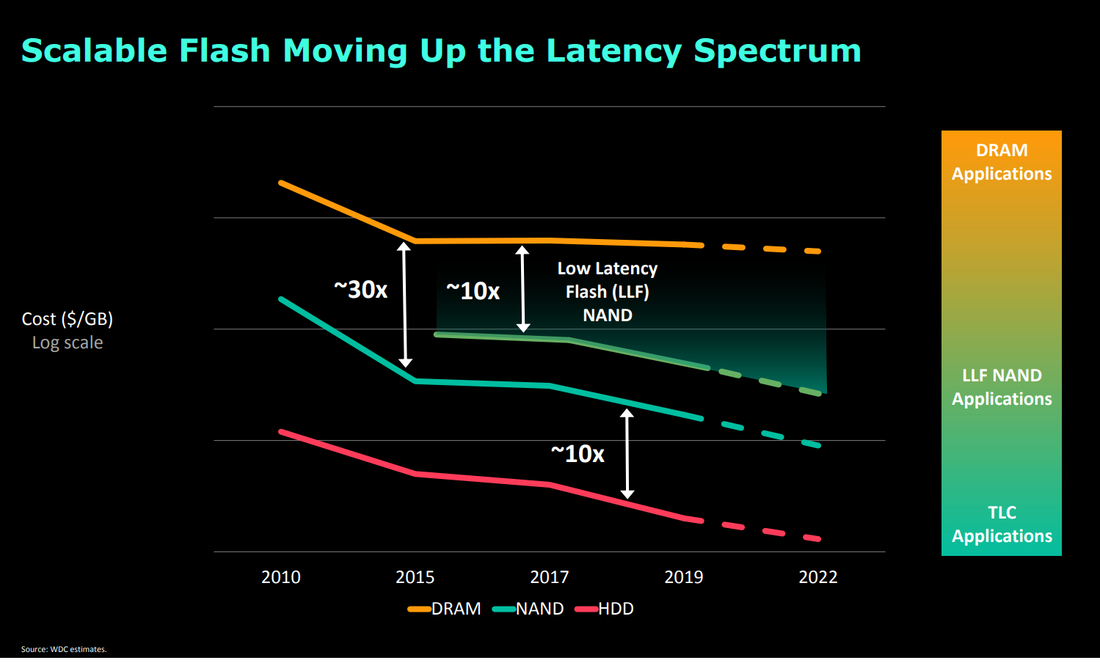 The 10x $/GB differential is important because, if true, it means HDDs will not go away for many applications, especially for storage of big data at hyperscalers.  Consider this – storage systems vendors such as Pure Storage are announcing  software systems that allow premises-based flash storage to be seamlessly moved to the cloud for longer-term storage, which means that cloud hyperscalers like Amazon Web Services (AWS) are likely to be HDD customers for a very long time.  Nevertheless, flash will keep on taking share from HDD.  The company has been reducing its manufacturing capacity for HDD, with significant layoffs and factory shutdowns over the past several years.  In fact, it plans significant ongoing cost cutting in its HDD manufacturing, it the range of 15-25% Y/Y decline next year.

The company also announced an ambitious plan to transition from licensed CPU cores to RISC based cores, for which it expects to pay no licensing and/or royalty fees.  WDC says it ships over 1 billion CPU cores per year, so this is a significant shift.  Also, the company plans to introduce an open-sourced memory interface called OmniXtend memory fabric, which will pit it against Intel (using DDR4, etc.) who has historically launched its own interfaces.  WDC is now a very big player in storage, having built through organic growth and acquisitions.  It has more market might and these new initiatives have a better opportunity to launch than in the past.

Additionally, the company said that its near-term business trends are under pressure due to cyclical market fluctuations.  The memory semiconductor industry has historically endured a boom/bust cycle and now the company is explaining it has entered the bust part of that cycle.  Since its earnings call on October 25, 2018, it says conditions have deteriorated somewhat more​, partly the result of hyperscalers continuing to reduce inventories and partly due to mobile phone companies still reducing forecasts of demand.  The company expects 2019 will see flash demand below the historical range and that hyperscalers should see a return to growth in 2H19.

Lastly, the company’s Data Center Solutions group, which employs a vertically integrated strategy to compete with traditional storage systems companies such as DELL-EMC, NetApp, HPE, Pure Storage and others, just experienced a record quarter on a revenue basis and is approaching break-even in its operations.  The company has the goal of becoming a top 5 player in data center solutions, which we take to mean, it is planning to take share from the current players.  The group has experienced 17x revenue growth from Q1FY19 compared to Q1FY16, according the presentation (of course, the group has made acquisitions that bolster this number), has shipped 3 Exabytes in the months in calendar 2018 (which isn’t over yet) and has shipped 8,500 systems and platforms since inception.  The company plans to experience “double digit” revenue growth rates for this unit in the future.